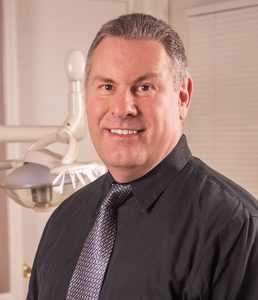 Dr. Duddy has been practicing dentistry for over 22 years. In that time, in that time he has developed a better understanding of all of his patients. Patients often at times come to their appointment feeling anxious/nervous, as though there is no possibility of having a comfortable experience, but Dr. Duddy has the confidence to help erase all his patients’ fears while providing gentle, advanced dentistry that they can count on, so their teeth can cease to be a problem in their lives. That’s why he became a dentist, to give people beautiful smiles and greater satisfaction with themselves. Dr. Duddy was born and raised right here in Montville Township. After graduating high school, he attended Farleigh Dickenson College where he graduated in 1989 with a major in Biology and a minor in Chemistry. He then went onto study at the University of Medicine and Dentistry of NJ where he graduated in 1993 earning a degree of Doctor of Dental Medicine. In 1995 Dr. Duddy opened his own practice not only in his hometown but also in the same office he received his dental treatment growing up. In 2010, 2011, 2016, 2017, and 2018 Dr. Duddy was awarded by the Consumer Research Council of America “America’s Top Dentist” awarded by the Consumers Research Council of America. In his spare time Dr. Duddy enjoys spending time with his two children Jack and Brooke. He enjoys a variety of sports and athletic activities including training in Brazilian Jui Jitsu and coaching wrestling. Hunting and fishing are also a part of leisure time activities as well as seeing Broadway shows.